A portfolio by Jakob Frederik Ottosen

I was asked to make a video for some folks at Senior Erhverv Danmark formerly known as Ledergruppen Fyn. Basically a place where people over the age of 50 can get help with getting a job.

I accepted the task and then me, a teacher and another girl from my class went out to film a meeting for b-roll. It was the first time I had ever done anything like that and it was a nerve wracking experience.

After filming, we went back to the school and I began doing some compositing in After Effects. I’ve gotten a lot better with After Effects as of late. I feel like I can do almost anything with it.

I finished the video and sent it to them and they were quite happy with the end result.

This is the video I made for them. It is in danish.

We got an assignment to recreate a scene from the movie Hitchhiker’s Guide to the Galaxy.

It was the scene in the movie where the crew hits the improbability drive button and somehow turns a pair nuclear missles into a bowl of petunias and a whale. The video follows the whale’s inner monologue as he makes his descent towards a planet. I’m mostly proud

We were asked to make a christmas bilka promo on our own in After Effects. This was the end result from me.

Some stuff I’m making in my free time.

I run a youtube channel called Jacbros. It’s a comedic video game review/analytical show that usually takes bad games and makes fun of them. I’ve met many people throughout doing these videos and it’s mainly where I get most of my practice for utilizing After Effects. It’s been a dream for me to one day be able to make a living off of doing this show, but it’s too complicated, difficult and takes a lot of dedication and time. Dedication which I have and time that I do not. Doing this show has been life changing for me. It’s one of the fondest things I’ve ever done in my career.

Here are some of the best videos I’ve made.

(Not for the person that hates swearing)

I haven’t updated the portfolio in a while. I’ve been busy with many many things, learning some more After Effects, learning Illustrator, doing photoshop tasks and making some more movies.

Things have been really hectic. We went to Amsterdam to check out the IBC convention, but we also had a task we had to take care of while at Amsterdam. We were supposed to make a commercial for the hotel we stayed on, the Hans Brinker Budget Hotel, considered to be the worst hotel in the world. So that’s what I did. The style of the commercials Hans Brinker makes, is the “don’t go here cuz we’re so bad” style. So we filmed a skit based on something they already had on their site called “Pay for a bed you won’t use”  It was a group project so I manned the camera and had my partner Mikkel do the acting work.

and the 2nd commercial

These were done using materials from the actual commercials and the commercials were in 240p which is why everything kinda looks abit muddy. The camera footage also looks muddy because we had to put some shadow/highlight on the video  otherwise it would appear way too dark (and it was recorded with an iPhone 4S so that doesn’t exactly help). Background noise was downloaded from Freesound.org and the end jingle was also from the actual commercials.

We also had to make a poster based on the videos. So I took a picture and used photoshop to cut out the text that was used in the original hans brinker posters and voila! 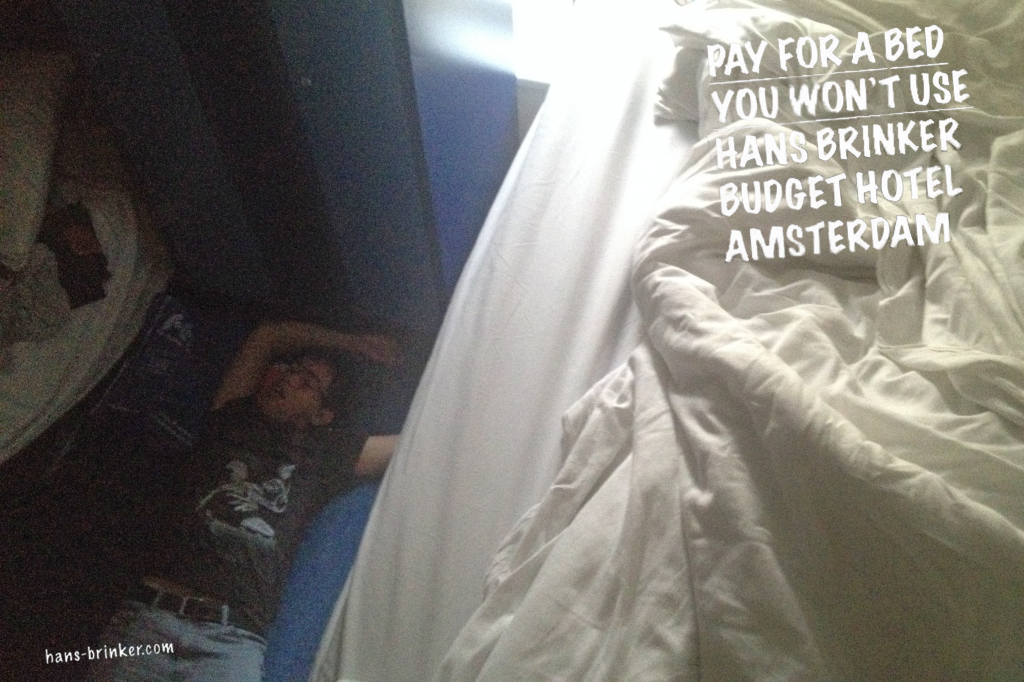 This one also suffered from being too dark so I had to use shadow/highlight on the picture to be able to make the picture clear. This might’ve been more pleasing to the eye if I had original assets, but remaking the text boxes would require me to find out what the exact fonts were and I just couldn’t do that.

Then we came back from Amsterdam and our teacher Soeren  gave us this animation task, we had to make this one video clip of a 3D T-Rex Model chasing a boy realistic. This required a LOT of masking in After Effects. The most tricky bit is near the end where the kid runs towards the camera.

We were given all the assets for this one. (Whew!)

That’s about all the stuff that was made. During this month! It was a really hectic and fun one!

We spent this week on doing some films. The theme was 5 second films based on the youtube channel with the same name. I had watched some of their videos before so I kinda knew what to do. First we had to make a 5 second film showing who we are. I didn’t know how to tackle it at first, but after thinking about it for a little bit I found out what I wanted to do.

Second film was a bit harder believe it or not. Make a 5 second film about… anything… That was difficult for me cuz there’s literally so many different topics but eventually I settled on a skit about being scared about spiders.

Theme by Anders Noren — Up ↑